The telephone rang several times after Daniel’s death but no one was on the line when Samantha picked up the receiver. After saying hello, she’d listen intently for the caller to identify themselves.

There were no human sounds to hear, no dial tone, nothing but static. She always hung up the phone confused thinking someone was playing tricks on her.

Samantha realized later that other people were also familiar with after-death communications (ADC's). In a popular book, Hello from Heaven, it’s noted that ADC's are spiritual gifts. They’re intended to increase our spiritual awareness of who we are and why we’re here. They also alert us to the truth that there is no death and we all have a love for others that’s eternal.

Daniel’s spirit soon told her it was time to stop listening to the eleven CD's she’d made. They’d served their purpose and it was time to move on. The CD's were weaned down to three with his guidance. She still listened to some of the original songs but began to play the last three CD's more often. Daniel then directed her to stop listening to some of the songs on those disks. They no longer reflected the awareness of his spirit. Now she had to make a memorial CD to give to family and friends.

The memorial CD held songs related to his accident and the Otherside. They acknowledged there is no loss, no death. Samantha was surprised to hear “Inside Us All” by CREED. The song notes a piece inside everyone that helps them to carry on. Her awareness of that piece in the core of her heart grew daily as the song became her mantra.

Every chance she got Samantha watched the video she’d made of Daniel. She repeatedly watched the part when they were on a Keys family vacation one night.

Being the jokester that he was, Daniel had bought a huge, blackish brown, plastic, palmetto bug. He planned to trick everyone with it.

The plastic bug was attached to the door leading out to the view of the Bay in the morning. It was hard to miss seeing the bug since everyone went out that door. Some of them were frightened but they all had a good laugh. The fake palmetto bug remained a source of laughter throughout the day.

Samantha cried bitter tears thinking of how they would have to bear their first family vacation without him. After a while, she got up to get a drink to get her through the night. She saw a palmetto bug as soon as she turned on the light in the kitchen. It was just about the size of the one in the video and ran across her right foot. She screamed in terror.

James jumped up out of bed and ran into the kitchen. He chased the bug around the room and squashed it with his left foot. It was the first of many palmetto bugs Samantha saw in the house over the next year. They appeared every time she watched the video segment of Daniel’s plastic palmetto bug. She finally stopped watching the video but occasionally saw a bold one in her kitchen or living room.

Sometime later in her spiritual progress, Samantha learned that Daniel had been trying to break through the veil to communicate with her. She was so wrapped up in the grief of thinking he was gone that it was harder for his spirit to break through from the Otherside.

Many times the bugs would appear when James was not home. Samantha eventually learned to chase them herself. She killed them and flushed them all down the toilet at first. But then she began to think she was to let them live. They were messengers sent by the spirit of her son to let her know he was still around. She was to treat them with love. 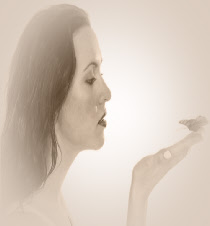 Samantha started to silently talk to them in her mind and thank them for coming. Then she’d let them know they belonged outside and she was going to release them. She told them she would not hurt them. All they needed to do was be still as she picked them up and carried them outside. She used a paper towel to pick them up and as she did, she was amazed that they let her. James really wondered about her sanity when he saw her do it.

Depressed after midnight one night, she opened the kitchen cupboard to get a cup for ice cream. A palmetto bug quickly jumped onto her chest. She panicked immediately, screamed, and brushed it off onto the floor. James was fishing in the Everglades so she was alone in the house. She began angrily cussing at Daniel out loud.

“This isn’t funny,” she said stamping her feet up and down on the linoleum floor.

“Oh, come on Mom,” she heard Daniel reply. “Lighten up. You have to admit it is.”

Samantha could see him laughing in her mind. He thought it was funny because he’d scared her more than he had when they were in the Keys. It was his way of letting her know he was still around. She wasn’t happy about the way he did it and asked him to find other ways to alert her of his presence. Daniel told her to stop grieving. He wanted her to be happy. He wanted her to have some fun for a change. She agreed to try and then made a new rule that she only wanted to see certain creatures. Her preferred list started out as only butterflies, birds, and cats but soon expanded.